What is Emotional Intelligence (EQ)?

What EQ is Not . . . “Being nice,” “Being emotional”, Personality, The opposite of IQ

Why does EQ matter?   see RESOURCES - The Business Case for Emotional Intelligence

EQ has twice the power of IQ to predict performance. EQ is also a better predictor of performance than employee skill, knowledge or expertise.

Emotions can make or break trust, loyalty and the ability to produce desired results.  Current research indicates that leaders with a strong EQ are more ethical and create workplaces where people can excel.  EQ is strongly linked through research to the following critical outcomes for work and life success: 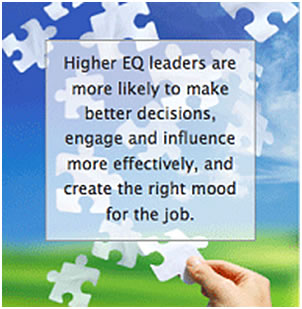 “Numerous studies explore the financial implication of emotional intelligence; particularly how higher EQ leaders produce more powerful business results. One such study tested 186 executives on EQ and compared their scores with their company’s profitability; leaders who scored higher in key aspects of emotional intelligence (including empathy and accurate self-awareness) were more likely to be highly profitable.”